Shape and size matter – but are they the difference between success and failure in sport? Simon Rea explains.

Copyright: Galina Barskaya | Dreamstime.com A perfect gymnast - but would he make such a great weightlifter? Imagine strolling into the vast Olympic village canteen.  As you look around you see athletes of all shapes and sizes – some athletes around five foot (1.5 metres) in height and weighing around 45 kilograms and some amongst the tallest people that you have ever seen. All body shapes are represented here and if you were to play a game titled ‘Guess the athlete’s sport’ you would be able to play it fairly successfully.

Why is this? Well, success at most sports requires a unique blend of height, weight, body type and muscularity to meet the physical demands of a sport.  You may have guessed that the small, slim female athletes were gymnasts, while the heavily muscled athletes with relatively short arms and legs were weightlifters. The group of athletes who are all around six foot six inches (two metres) could be a rowing team and the athletes over seven foot (2.15 metres) are probably basketball or volleyball players.

At top Olympic level it is vital to have the optimum physical attributes as the building blocks for medal success. However, some sports are able to accommodate people of different weights (eg, combat sports), and physiques (eg, athletics).

But is it so simple? Yes - marathon runners tend to be lean and swimmers tall and broad shouldered; but what about sprinters? If you were to design the perfect sprinter you probably would not come up with the world record holder, Usain Bolt, as his long limbs seem to be too long to accelerate efficiently. He is six foot five inches tall (1.95 metres) in an event where most athletes are significantly shorter – former world record holder and Olympic champion, Maurice Greene, was five foot nine inches (1.75 metres) and 82 kilograms in comparison to Bolt’s 94 kilograms.  Top European sprinter Christophe Lemaitre is six foot two inches (1.89 metres) and 72 kilograms – he has a body type more often associated with long distance runners.  In the case of sprinters' limb length, muscularity and height are important factors but you have to dig deeper to find the basis of speed production – that is muscle fibre type. These top athletes have a relatively higher number of fast twitch muscle fibres which create far more power than the norm so they’d be particularly good at the standing jump test.

Introduction to sport, fitness and management 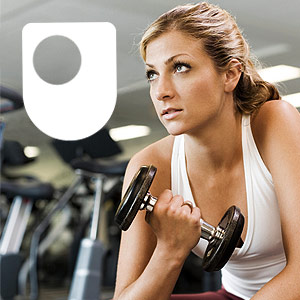 This series of tracks looks at Health and Fitness centres and how they are run as well as...

So leg length is an important factor in some sports. What about arm length? Most people’s arm span is roughly equal to their height but in some sports it is beneficial to have an arm span shorter than your height.  For example, in weightlifting the longer the athlete’s arms then the further they will have to move the weight; successful weightlifters have relatively short limbs. However, swimmers who use their arms like oars through the water will benefit from having an arm span greater than their height.  Swimmers also tend to have large hands that act like paddles and narrow hips to minimise resistance through the water.

If having the right physique is important for Olympic medals then some countries take this a stage further by ‘screening’ to help identify potentially talented athletes by measuring factors such as their height, weight, arm span, agility, power production and speed.  In the 1970s, East Germany did just this to identify track and field athletes and gymnasts who would be successful on the world stage.  It was further developed by the Australian Institute of Sport who tested 14 to16 year olds in their schools. The validity of these approaches has been questioned since there are huge variations in physical attributes during adolescence and it is important to consider other social and psychological factors that influence athletic development. However, it is often the physical attributes and a little good fortune which channel youngsters into sports they are more likely to succeed at - famously, the five-time Rowing Olympic Gold medallist Steve Redgrave was spotted by a PE teacher (and luckily a rower) at his school who noticed that Steve had extremely long arms and legs, but wasn’t able to catch a rugby ball!

Whether you are long, tall or short there will be a sport where your shape could mean you have the potential to be a medal winner provided you also have the right social and psychological characteristics.

Why not see how the Open University can help you further with our range of sporting courses?