What is the reason for two segments

To understand Thales’ theorem you need to understand very well what is the reason between two segments.

For example, we have these two segments:

As you know, the segments are delimited by two extremes and are named by the extremes that limit it. The red segment, which begins at end A and ends at end B, is called segment AB.

If two segments have some relation between them, the same letters are used to name them, but since they cannot be repeated, the single quotation mark next to each letter is used and the quotation mark reads “prima”. So A’ would read “A prima”.

Thus, the blue segment, which starts at A’ and ends at B’, will be called A’ B’ segment.

Box]The ratio (or ratio) of two segments is the result of dividing the length of those two segments.[/box]

The ratio of these two segments is 0.5, which means that AB is half that of A’ B’.

In this case, the ratio is 2, or in other words, segment A’ B’ is twice as high as segment AB.

Therefore, it is not necessary to calculate the ratio in both ways. Calculating it in one of two ways is enough.

Let’s figure out his reason:

When two pairs of segments have the same reason, they are said to be proportional.

Therefore, segments AB and A’ B’ are proportional to CD and C’ D’:

Once I’ve explained the reasoning between two segments and the proportionality between two pairs of segments, let’s look at Thales’ theorem. 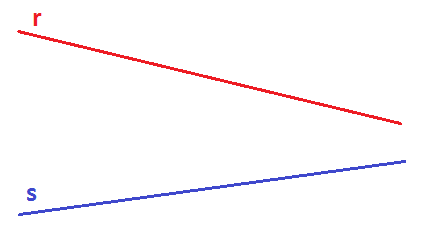 To these two straight lines, we cut them with several parallel lines (green colour), as follows: 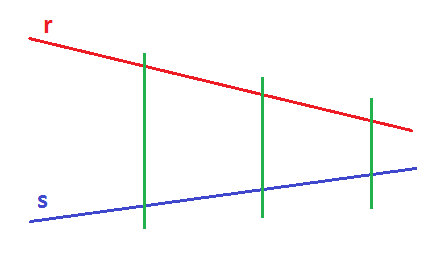 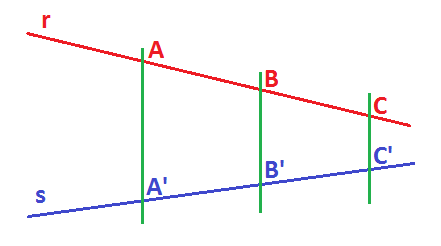 The green lines have divided the line r into two segments: segment AB and segment BC. We also have a third segment if we consider the first and last parallel line, i. e. the AC segment.

They have also divided the line s into two segments A’ B’ and B’ C’ and if we consider the first and last parallel line, there is a third segment A’ C’.

Thales’ theorem tells us the following:

And what does that mean?

As they have the same reason, AB and A’ B’ are proportional to BC and B’ C’.

If we consider the segment formed by the first and last parallel line, i. e. the AC segment, it is also proportional to the AB segment:

What is Thales’ theorem for?

Thales’ theorem allows you to calculate the length of a segment, knowing the values of all the other segments of two straight lines that are in Thales’ position.

We’ll solve several exercises to make it much clearer.