This case study describes how the OEPS project worked with Parkinson's UK to build an open online course.

The Opening Educational Practices in Scotland project, which is led by the Open University in Scotland, has worked with the UK Parkinson’s Excellence Network (Parkinson’s UK) to create an online version of a Parkinson’s UK course which was originally delivered as a face to face workshop for Health and Social Care staff.  Parkinson’s wanted to make the course more widely available and rewriting it for online using the expertise and guidance of the Open University via the OEPS project was their chosen route for wider dissemination.

Learning design workshops were held to identify the audience, purpose, learning outcomes as well as discuss potential informal assessment methods and help them understand about open educational resources and open licencing.  Parkinson’s UK chose to have a series of optional and graded quizzes to lead to a digital badge as well as a Statement of Participation (which displays the badge in the downloadable certificate).  They did not want to provide tutor or moderator support as they wanted the course to be perpetually open for learners to study in their own time. During the design process careful consideration was given to designing the activities so that they could be carried out as individuals or by groups in workplace and community settings.  A reflective log was also included, as an optional tool for learners to use to help them reflect on what they learned.

The OEPS project team guided them through the process of rewriting the existing workshop materials (which included PDFs of booklets they had previously published online) into an online course and helped with writing the quizzes.  The material was edited (going through a 3 stage edit process).  An asset register was compiled which listed out all the images, video, diagrams and audio files to be included in the online course and the licencing information for each. Parkinson’s UK were required to record in the asset register whether each item was to be released under an open licence or whether it needed to be listed as All Rights reserved.

The OEPS project helped with devising film scripts for introductory videos and the filming of people displaying various symptoms of Parkinson’s which were used in the teaching material.  The video was filmed by an external company and edited by OU Audio Visual staff.  The use of OU AV staff muddied the lines of accountability in terms of rights clearance as the OU systems are set up for OU modules not external production. In future OEPS will recommend that partners have all video production done externally so that it is clear that responsibility for rights clearance remains with the partner organisation.

The course content (text, video, images, audio, diagrams and animations) was tagged and rendered in OU structured content (XML, using Oxygen software) to OpenLearn Works by OU staff to produce a course with a clear navigational flow.  The quizzes were set up using Moodle quiz in OpenLearn Works by the OU.  Once the draft course was reviewed by Parkinson’s UK final edits were carried out.  The OU then tested all the quizzes, set up the activity and course completion criteria, the badge and the statement of participation.

Parkinson’s UK chose to pilot the course in its live state with a small group of selected users who provided feedback on their experience of studying the course.  Minor changes were applied to the course (if major changes had been required for the quizzes then the badge would have been disabled and a new badge created, however this proved unnecessary).  The pilot users told colleagues about it, so a few additional people started to study the course when it was still in the pilot phase.  Some of the learners worked together in local groups (face to face) to discuss the course material.

Following the pilot Parkinson’s UK approved the course for publicity and more learners have enrolled.  Parkinson’s UK are planning to develop further openly licenced courses for other audiences.

To complement the course a range of advice was also published on the OEPS hub website to highlight good practice in use and potential progression opportunities.

The course can be found at http://www.open.edu/openlearncreate/UnderstandingParkinsons

The image is the Digital badge for Understanding Parkinson's 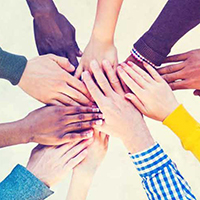