Ta, cheers, much obliged: A brief history of 'thanks' in English

There's more to just saying thank you than you think. Philip Seargeant delves into the fascinating linguistics of expressing gratitude.

The practice of saying ‘thank you’ – of expressing gratitude to someone for an act of kindness – is a fundamental element in the way we interact with one another. One of those small, embedded traditions which make up the everyday stuff of human relationships, and help with the smooth running of society. There are several different ways to express the idea in English, many of which reflect different levels of formality. At the more casual end of the spectrum, for example, you have a word like ‘ta’, originally a childish form of ‘thank you’ (dating from the 18th century), but now commonly used as a straightforward colloquialism. Or the word ‘cheers’, which developed this sense in the 1970s, leading The Times to comment that ‘By a remarkable transition from the pub to the sober world at large outside cheers has become the colloquial synonym in British English for “thanks”.’

Other expressions reflect slightly different conceptions of what’s involved in our relationship with the person we’re thanking. Psychologists draw a distinction between gratitude and indebtedness. In the former you simply appreciate or acknowledge an act of help or kindness. In the latter, you feel that because of this kindness you now owe something to that person. When we use a phrase such as ‘much obliged’, or ‘I owe you a debt of gratitude’, we’re reflecting this second aspect of the relationship. Other European languages similarly use words which have developed initially to reflect this tradition. The Portuguese word obrigado, for example, comes from the past participle of the Latin obligō – ‘I bind in obligation’. The standard expression of thanks in French also develops from a term relating to transactions and debts: Merci derives originally from the Latin merces, meaning ‘wages, payment, reward for service’. The Italian grazie and the Spanish gracias, on the other hand, both derive from the Latin gratias agere – simply meaning ‘to express gratitude’ – much as we say in English, ‘I am very grateful’.

The most common phrase in English, however, remains ‘thank you’ (conventionally written as two words, except when used to modify other things, when a hyphen is added – e.g. ‘a thank-you letter’). This usage dates back to the fourteenth century, and is simply a shortening of the more complete ‘I thank you’. The gradual condensing of a phrase or polysyllabic word over time is quite a common feature of the evolution of our vocabulary. It happens both in single words – ‘esquire’ becomes ‘squire’ – and in phrases – the oath ‘God’s truth’ becomes ‘strewth’. ‘I thank you’ therefore becomes ‘thank you’, which can then be further shortened to ‘thanks’, and sometimes even to ‘ta’.

Digging further into the history of the phrase we find that it derives originally from the word ‘think’. In Old English (c.450 – c.1100) the primary sense of the noun ‘thank’ was ‘a thought’. From there, according to the Oxford English Dictionary, the meaning moved to ‘favourable thought or feeling, good will’, and by the Middle Ages it had come to refer to ‘kindly thought or feeling entertained towards any one for favour or services received’ – i.e. much the meaning it has today. We could therefore paraphrase its meaning as: ‘for what you have done for me, I think on you favourably’. 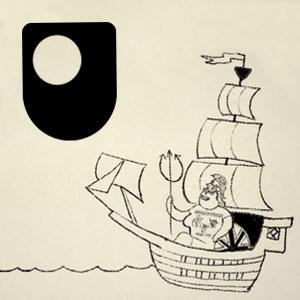 The History of English in Ten Minutes

Where did the phrase ‘a wolf in sheep’s clothing’ come from? And when did scientists finally get round to naming sexual body parts? Voiced by Clive Anderson, this entertaining romp through 'The History of English' squeezes 1600 years of history into 10 one-minute bites, uncovering the sources of English words and phrases from Shakespeare and the King James Bible to America and the Internet. Bursting with fascinating facts, the series looks at how English grew from a small tongue into a major global language before reflecting on the future of English in the 21st century.

Explore the fascinating origins of some words in the English language with this interactive world map. Simply select the book items to uncover the word and its history.