Oyster is the common name for a number of different families of bivalve molluscs that live in marine or brackish habitats. Oysters are filter-feeding bivalves. Commonly, the valves are highly calcified and an irregular in shape. Oysters can be eaten raw or cooked, and are sometimes considered a delicacy. Oysters are harvested for food, for pearls or for their shell.

Pacific oyster or cupped oyster (Crassostrea gigas; re-classified as Magallana gigas), is one of the most popular for commercial culture in many regions of the world, as it is comparatively robust and has a relatively high market value. It is native of south-east Asia, but has a ubiquitous presence in many oyster producing areas today.

The European flat oyster, Ostrea edulis, is rare compared to Gigas, but occurs naturally along European coastlines (Norway to Iberian Peninsula and Black Sea), and is also farmed in Europe to a much lesser extent. The populations have been on declining, but some restoration efforts are in progress (e.g. NORA & Seawilding projects).

Pacific oysters are protandrous hermaphrodites, most commonly maturing first as males. In areas with good food supply the sex ratio in older oysters shows a predominance of females, whereas the reverse is true in areas of low food supply. Females can revert back to male when food supply is limiting as, for example, when they are severely overcrowded. Egg production begins at around 10°C and spawning generally occurs at temperatures above 20 °C. females can produce between 50million to 200 million eggs per spawning.

The larvae settle out of the water column after 2 to 3 weeks, these spats will attach permanently to their chosen substrate, where they grow to adult. Growth rate varies depending on conditions and they can reach adult size in 18 to 30 months. Size and shape are extremely variable, resulting from competition of space and environmental conditions. Ostrea edulis have a longer lifespan from 2 to 10 years, maturing after about 3. Oysters are preyed on by starfish, winkles, and other opportunists. 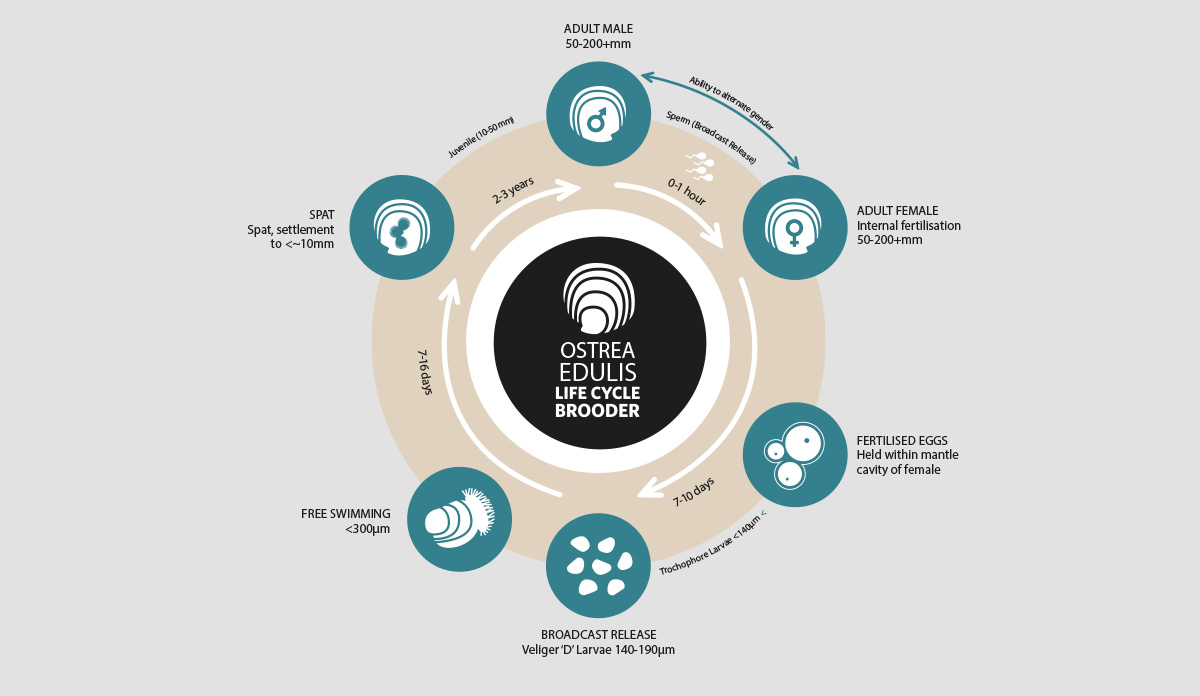 Oyster farming was practiced by the ancient Romans as early as the 1st century BC on the Italian peninsula. There are currently 2 types of production techniques in use, the general on-bottom methods, and the off-bottom methods, which are more common.

The on-bottom methods involve seeding suitable substrate and planting in the intertidal or sub-tidal ground, where the stock is managed. This is subject to predators, such as starfish and crabs, and measures must be taken to protect the stock.

The more common, off-bottom methods involve floating trays/rafts, lantern baskets, intertidal trestles or oyster bags, and many more variations. The oysters are contained inside structures (mesh bags, trays, etc.) and protected throughout the growing phase. Oysters are sensitive to overgrowth and limited water flow so stock management and thinned out may be required as they grow. Production costs are highly variable depending on the site, environmental conditions, and mortality rate. There are a number of oyster diseases that must be monitored for (e.g.oyster herpes virus and Bonamia ostreae).